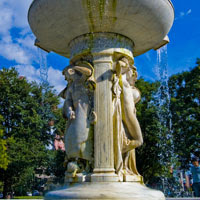 If you missed New Directions in Foundations of Physics conference earlier this month, here are a few memorable one-liners. You’ll notice that many are from Bill Unruh, who seemed to be in rare form that weekend.

In this case it was more important to be right than to be correct. — Bill Unruh

Unruh was discussing Hawking’s original calculation of the thermal radiation emitted by black holes. He ended with a very interesting discussion of “dumb-holes,” along the lines discussed recently on this blog.

Your transparencies should never be more clear than your thoughts. — Bill Unruh

Here, Unruh was struggling to focus one of those new overhead-projectors, the kind that project an actual live video of your transparency. He had just explained his intention to present us with a rough-and-ready example, so the timing was impeccable.

Yes, but… but still, I… I mean, I really shouldn’t tell *you* that you can’t move faster than light. I’m teaching my grandmother to suck eggs, here. — Bill Unruh, to Charlie Misner

As I recall, Unruh had mentioned that you couldn’t escape a black hole unless you traveled faster than light. Misner was gently remindung Unruh that, after all, we have little empirical evidence about the interior of black holes.

Unruh: But those are just words!
Tumulka: Yeah… I don’t know how to convey it better than with words

Here, Roderich Tumulka was explaining some feature of his relativistic GRW theory. I wish I could recall exactly what provoked Unruh to say this, but alas, my memory falters. At any rate, Tumulka admirably deflected his heckling.

I like to say that Feynman won the Nobel prize in 1965 for showing that BQP is contained in PSPACE. — Scott Aaronson

According to a standard picture, BQP is the class of computations quantum computer can do, and PSPACE is just the class of computations solvable in polynomial space. Aaronson was pointing out that, if we use the Feynmann path-integral approach to calculating the probability that a quantum computer “accepts,” then we’re required to sum up only exponentially many terms — and this sum is computable in PSPACE.

If we were physicists, we would have announced decades ago our discovery that all these classes [like BQP, PSPACE, NP, etc.] are distinct. — Scott Aaronson

Aaronson had just finished explaining how questions like the distinction between P and NP remain a major open problem in mathematics and computer science. Apparently, he considers the standard of “discovery” in physics to be a notch lower.

Hopefully I’ll see some of you at one of the remaining conferences this summer!