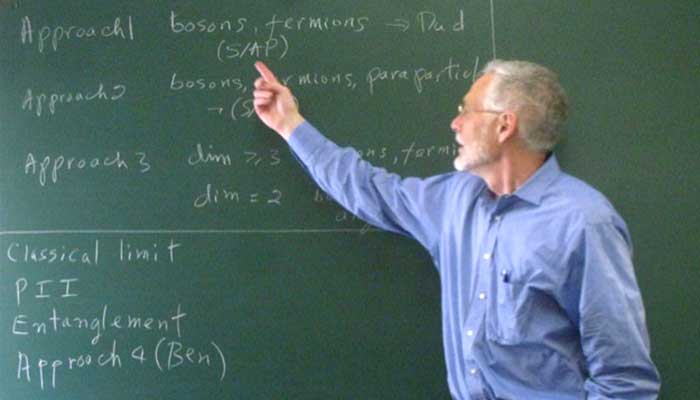 A superselection rule is a special limitation on what is observable in the quantum world. For example, we can never seem to observe interference from the relative phases between a boson and a fermion. This can be seen as a consequence of a superselection rule.

However, there are lots of ways to make the limitation of a superselection rule precise, and the literature is sometimes confusing as a result. To help keep things straight, John Earman (2008) started off a very rich article with five ways to express the presence of a superselection rule. I find John’s classification helpful, and so I thought I’d share a little summary. I’ll then briefly mention the fermion-boson superselection rule as an example, and end with some warnings about common mistakes.

John describes five basic characterizations of a superselection rule that are all mathematically equivalent. They’re expressed in the language of operator algebras, the rigorous mathematical language of modern quantum theory.

. Note that it may in general be a proper subalgebra of the set of all bounded operators

is said to have a superselection rule if any of the following are true.

If you have a single boson and a single fermion, these particles occupy a Hilbert space of the form

be a vector state of the boson, and let

be a vector state of the fermion.

That’s an inevitable fact of quantum life. But it still seems to be the case that no measurable quantities are changed under the transformation

, and so we seem to have physical grounds to believe that

. This gives rise to a superselection rule, in all of the senses above.

is the relevant non-constant operator for SSRII and SSRIII, and

are the relevant subspaces for SSRIV and SSRV. It is a good exercise to check that all these superselection rules follow. But if you get stuck, many of the calculations can be found in textbooks like Ballentine (1998).

It’s easy to slip up with superselection rules, especially when time reversal is involved. Here are two words of warning to keep an eye out for.

1. There’s sloppy language out there. Notice that none of the expressions of a superselection rule above imply that a superposition of a boson and a fermion is “impossible” or “not realizable.” Experts often say this when they’re being sloppy, but it has a tendency to confuse students. The best thing to say is that we are limited in what we can observe about the superposition of a boson and a fermion, in the sense of SSRI-V above. Nothing more.

2. Time reversal invariance has nothing to do with it. Following Wick, Wightman and Wigner, I said above that the boson-fermion superselection rule follows from the way that two successive applications of the time reversal operator transform fermions and bosons, and the fact that

. I did not assume time reversal invariance, which says that

is the Hamiltonian, and this assumption is not needed. That’s good, because time reversal invariance has been known to fail since the 1964 discovery of T-violation by James Cronin and Val Fitch.

And yet, in a very strange historical episode, Hegerfeldt, Kraus and Wigner (1968) declared that the Wick-Wightman-Wigner argument is invalid because it relies on time reversal invariance. Earman follows them in this mistake (pg.379), as do many others.

But this declaration is simply wrong. Time reversal invariance has nothing to do with it. Just do the derivation to see what I mean, or look at the original Wick, Wightman and Wigner. Or, more intuitively, notice that superselection rules are properties of the “kinematics” or observable structure of a quantum system. Invariance under time reversal is a property of the “dynamics” or time evolution of that system. The observation that

can be a perfectly good constraint on the kinematics, whether or not

is a property of the dynamics.