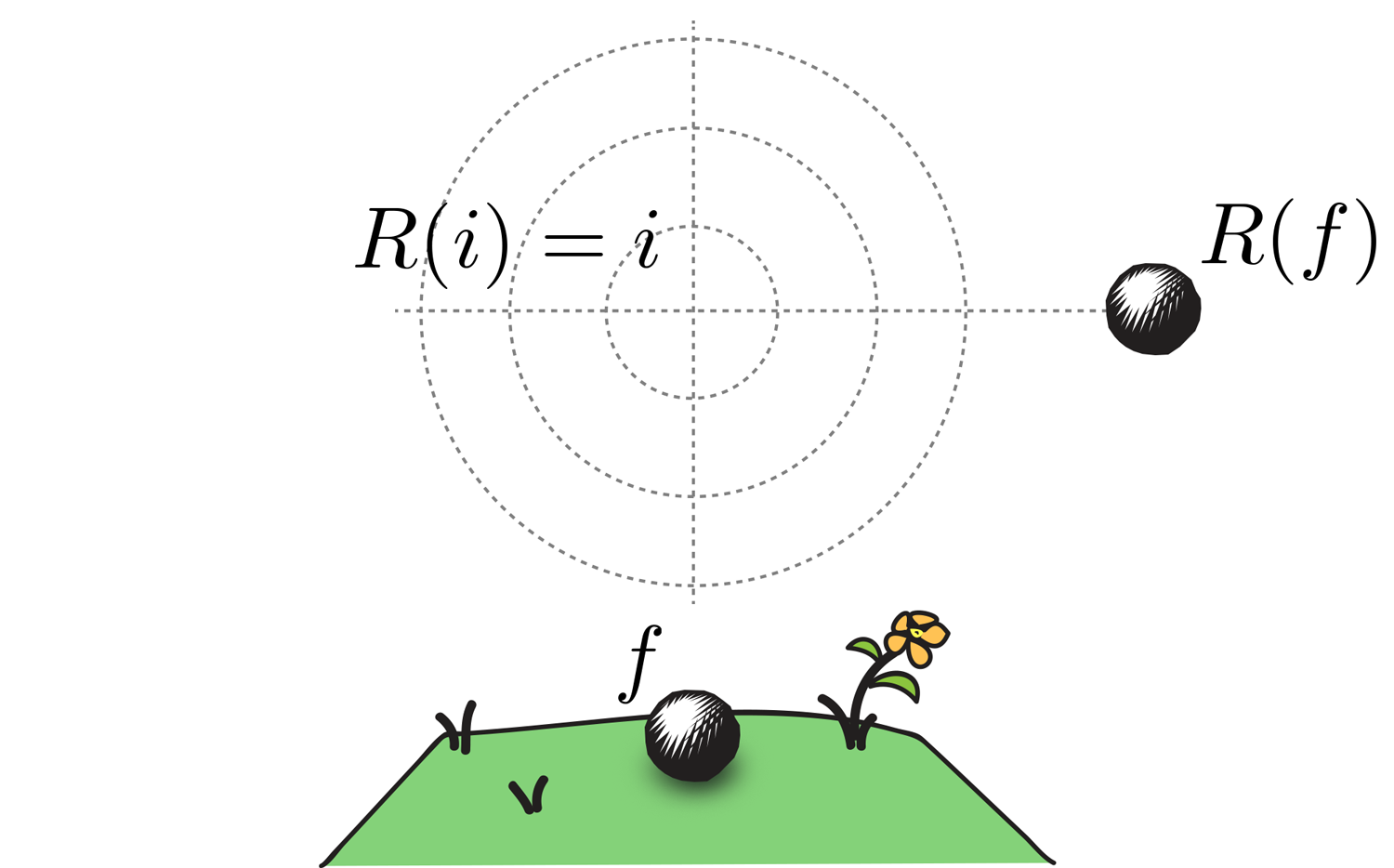 “When certain effects show a certain asymmetry, this asymmetry must be found in the causes which gaves rise to them” (Curie 1894).

It’s an intriguing principle — for example, it has applications in particle physics! — and there are lots of great ideas in Ismael’s article. The article also did a wonderful service in helping to bring Curie’s Principle to the attention of philosophers. However, one of the central claims of Ismael (1997) is to have formulated Curie’s Principle as a mathematical theorem, argued for in Section 3 of the paper, “The Proof”.

In fact, Ismael’s statement is not a theorem. The formal argument given in the article is invalid, and in particular contains an erroneous first premise. I’d like to explain here in clear terms what went wrong, and why even Ismael’s statement of Curie’s principle is false.

Note: my intention is really not to beat up on this lovely little article, which I very much enjoy! But I would like to set the record straight on matters of fact, especially for students interested in this subject.

There are lots of statements of Curie’s principle out there. I am interested in Ismael’s (1997) mathematical formulation: begin with a set

(a set of “effects”). Assume that every cause has no more than one effect, by asserting that the causes and effects are related by a function

. Ismael views this (possibly many-to-one) function equivalently as a subset

Finally, let a “symmetry transformation” be a pair of bijections: one

. These are formally different functions, since they have different domains. But I will follow Ismael in a slight abuse of notation, by dropping the subscripts and just writing

The statement of Curie’s principle that Ismael formulates is then the following.

Statement. Given a function

between sets, and two bijections

, if it is the case that

(symmetry of the cause), then it follows that

(symmetry of the effect).

Some readers will immediately see that this statement is false. The bijections

are totally arbitrary and unrelated, so this surely cannot be true! But before getting to that, let me go through Ismael’s argument, as it illustrates a key point that I would like to make.

Ismael’s argument in Section 3 (pg.170) has only a few components, which can be summarised as follows.

(the set of pairs or “solutions” characterising the function

. [Ismael refers to these together as “a pair of solutions” without further argument (p.170).]

(symmetry of the cause).

is a function, so

(symmetry of the effect). [Ismael writes, “any Curie-cause has only one physically possible effect among the B’s and it follows… that

The error in this argument is in the very first premise. There is certainly no guarantee that an arbitrary bijection

will act invariantly on an arbitrary subset

has just one element, and

be a singleton, and let

map this singleton to any other singleton; then

map every element of

to the same element

to a different element. Then

does not always mean that

There are more physical counterexamples, too: let’s give these symbols a physical interpretation. Suppose we’re describing a falling rock near the surface of the earth, and that the pairs

represent the initial and final states. Suppose further that

is an ordinary symmetry transformation, like rotation in space. Then it is certainly not true that the symmetry-transformed initial and final state

will always be in the solution set.

To see this, suppose the rock begins at rest at a position

above the ground, and ends by colliding with the ground at

a few moments later. In Ismael’s notation, this “solution” to the law of freefall is the pair

. Let our symmetry transformation be

is obviously invariant under this rotation, while the final state

gets rotated to a point on the horizontal. Thus, it certainly doesn’t follow that

is a solution to the laws of freefall as Ismael suggests: the rock falls down, not sideways! The counter-example is illustrated in the animation below.

As a counterexample to Curie

. John D. Norton (in 2016 / preprint) has identified a slew of similar counterexamples, including one quite similar to the example above.

Castellani and Ismael (2016 / preprint) have repeated Ismael’s (1997) statement above, quoting that formulation of the principle verbatim:

“Ismael (1997, 169) writes: ‘What the principle says depends crucially on how the terms ’cause’ and ‘effect’ are understood…. Let

respectively, of mutually exclusive and jointly exhaustive event types, and let the statement that

.’ So construed, the principle is quite general. There is no restriction on what the terms of the relation can be. … Someone who wants to apply the principle simply has to find a functional relationship.” (p.1009)

I hope it is now clear that, precisely because there is no restriction on what the terms of the relation can be, Ismael’s formulation of Curie’s Principle is not generally true at all. Someone who applies it simply upon finding “a functional relationship” rather does so at their hazard.

and the causal law

if something like Curie’s principle is going to be true. Many have recognised this, and managed to formulate correct statements that they refer to as Curie’s principle. Here, I will just point to my own version, which appears in my (2016 / preprint) take on Curie’s principle in electromagnetism; there, I use the phrase “Curie’s Hazard” to refer to what Ismael calls “Curie’s Principle”.

Regardless of how one calls it, here is a proposition in the neighbourhood of Curie’s Principle that is actually true.

be sets, and let

is a function such that,

then Curie’s principle is true, in the sense that

(symmetry of a cause) only if

The proof is an easy exercise (and found in the 2016 paper I cite above).

It also indicates a straightforward lesson: Curie’s principle is only true under a judicious interpretation of “causes”, “effects”, and “symmetries”, in addition to a strict limitation on their relationship (which I call “symmetry preservation” above). And, as Norton (2016 / preprint) points out, the suggestion that such a limitation is an “analytic truth” is often a dubious exercise in causal metaphysics.

Katherine Brading once asked me, following a chat about Curie’s Principle, what remains for researchers and students in the history and philosophy of physics to do on this topic. I wanted to end with a few thoughts about that question.

What not to do. As you might discern from the above, I don’t see much use in further attempts to state an “analytic formulation” of Curie’s Principle for general causal metaphysics. Norton’s article above argued, conclusively in my view, that this programme is fruitless. And the facts regarding simple mathematical statements resembling Curie’s Principle seem to be more or less understood.

However, there remain at least three topics of interest, where I suspect a clever young researcher could make interesting progress in the field.

What to do in the history and philosophy of physics. Curie originally made use of his principle in order to calculate the electric field that is produced when a crystal is compressed. This curious phenomenon, which Curie and his brother Jean discovered, is called the Piezoelectric Effect, and has interesting applications for renewable energy. But Curie’s original use and understanding of the principle has still not been thoroughly explored. Most treatments have focused on his (1894) reflections, cited above. But the principle also appeared in one of the founding articles on the Piezoelectric Effect, which Curie wrote with his brother in 1882 (see pg.247). Very little historical work has been done on this article that I know of, and remains ripe for the picking for a (ideally French-reading) researcher or student.

Moreover, a symmetry principle resembling Curie’s continues to be used in the modern field of plasmonics, such as in this (2017) usage as a selection rule for photonic crystal defect modes. Only some very early philosophical work has been done in understanding the conceptual basis and generality of such principles (e.g. in my 2016 article above), and it would be helpful to have an account that clarifies and explain the justification of such symmetry principles in this (and in Curie and Curie’s 1882) application (and especially if they turn out to be false in general!). 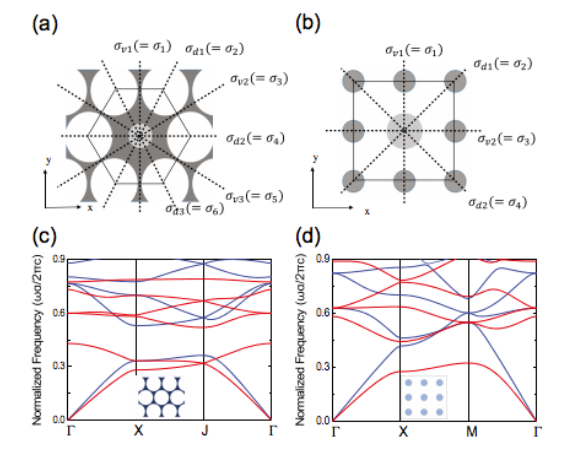 Application of Curie’s principle in plasmonics as a selection rule for photonic crystal defect modes, from Park, Choi, Song and Jhe (2017)

What to do about dualities in physics. Another important symmetry principle of intense interest in recent physics and philosophy is the notion of a duality. A classic example is the duality that exchanges the electric and magnetic fields in electromagnetism with magnetic monopoles. One schema for philosophical analysis of dualities in physics as simple “isomorphisms of theories” was recently suggested in a remarkable series of papers by de Haro and Butterfield (“A Schema for Duality, Illustrated by Bosonization“), de Haro, Teh and Butterfield (“Comparing Dualities and Gauge Symmetries“) and de Haro, Mayerson and Butterfield (“Conceptual Aspects of Gauge/Gravity Duality“).

A consequence of this (often merely conjectured) relationship between dual theories is that “a symmetry of a theory is a symmetry of its dual”. This idea, though strongly reminiscent of Curie’s Principle, clearly goes beyond a context where the language of “cause and effect” stands a chance of being clarifying. However, a more careful conceptual analysis of how such principles are being used in physics may prove fruitful, for example as a heuristic for interesting conjectures, or as a foundation for understanding dualities. These wonderful papers by de Haro, Butterfield et al. are an excellent place to start!