Note: This post later turned into a paper, which turned into a forthcoming article in BJPS. You can read the full preprint here: PhilSci Archive. 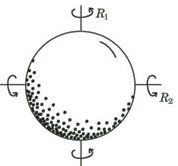 Group theory plays a special role in the foundations of quantum theory. Today, I want to discuss a philosophical view that uses this role as its jumping-off point. I call the view, Group Structural Realism..

The Structural Realist Hierarchy. The existing entities described by a scientific theory are organized into a hierarchy, in which ‘structure’ occupies the top, most fundamental position.

What it means to be ‘metaphysically fundamental’ is cashed out in various ways. For example, Ladyman and Ross characterize it using the notion of supervenience on properties:

Ontic Structural Realism (OSR) is the view that the world has an objective modal structure that is ontologically fundamental, in the sense of not supervening on the intrinsic properties of a set of individuals. According to OSR, even the identity and individuality of objects depends on the relational structure of the world. (Ladyman and Ross 2007, 130.)

For this discussion, let’s bracket the shadowy stuff, and focus on the hierarchy.

Standing between structural realism and what it endeavors to achieve is the meaning of the word structure. Bas van Fraassen has described one broad agreement among critics: “As almost every commentator has somewhat sadly remarked, this key word has its own problems” (van Fraasen 2006, 303). Ladyman and French themselves note that “Because of the width of its embrace and its complex history, defining what is meant by structure and characterising the tendency in general, is problematic” (French and Ladyman forthcoming, §1). Ladyman and Ross similarly accept the criticism that structural realism may not be well ‘worked out.’ However, they retort that “it is far from clear that OSR’s rivals are ‘worked out’ in any sense that OSR isn’t (Ladyman and Ross 2007, 155).

Clearly, we ought to work something out. As a start, I will try to show that, using the resources of group theory and quantum mechanics, a precise characterization of ‘structure’ can be worked out in as much detail as you like. The specific view that I propose we work out is the following:

Group Structural Realism (GSR). The existing entities described by quantum theory are organized into a hierarchy, in which a particular symmetry group occupies the top, most fundamental position.

GSR has a good deal of precedent among structural realists. For example, Aharon Kantorovich argues for a conception of particle physics in which “internal symmetry is the deepest layer in the ontological hierarchy,” and in particular, that “flavor SU(3) symmetry was ontologically prior to hadrons… whereas SU(5) is ontologically prior only to baryons” (Kantorovich 2003, 673). Holger Lyre has suggested an account of objects that “takes the group structure as primarily given, group representations are then construed from this structure and have a mere derivative status” (Lyre 2004, 663). Similarly, Ladyman and Ross argue that, “elementary particles are hypostatizations of sets of quantities that are invariant under the symmetry groups of particle physics” (Ladyman and Ross 2007, 147).

In the next post, we will discuss some of the physical results that make GSR plausible. By identifying which structures are of interest in one particular context, GSR may stand a worthy chance of finding some connection to the physical quantities that we actually observe and measure in the lab. This step is absolutely essential. Bothersome though it may be, any acceptable account of reality must show some connection to the observable world.