crank, n.
A pejorative term for a person who holds a belief that a vast majority of their contemporaries consider false. A “cranky” belief is so wildly at variance with commonly accepted truth as to be ludicrous, and arguing with cranks is useless, because they will invariably dismiss all evidence or arguments which contradict their unconventional beliefs. (Wikipedia.org)

Two propositions, Fermat’s Last Theorem and the Goldbach Conjecture, truly stand out among cranky topics, in drawing the vast majority of bogus “proofs” (although the Riemann Hypothesis may be another contender.) This is well-known among publishers like arxiv.org and philsci-archive, which get plenty of crank submissions. These topics are generally treated with distrust. So it’s just stunning that Springer, one of the most trustworthy scientific publishers, may have just printed a book containing crank “proofs” of both these propositions!

The author, Nico F. Benschop of Crank.net fame, has seen basically the same argument refuted by number theorist Robin Chapman seven years ago. (Chapman can be found dismissing this book anew in a sci.math post last week.) You can take a look at the work here through Google Books; on page 133, you’ll find the following alleged “proof” of the Goldback conjecture: 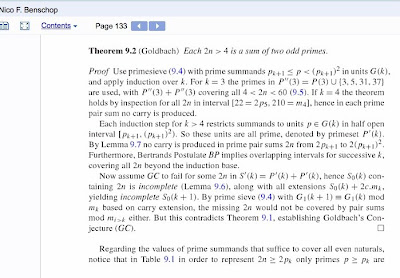 Yes, it’s three paragraphs of jargon, and it’s not clear if it’s worth the effort to decipher it. Thanks to John Baez for pointing this out — Springer really managed to miss a whopper!