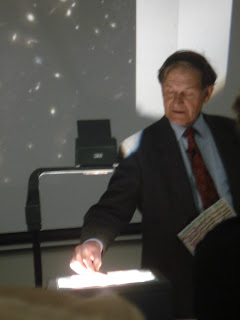 Roger Penrose came to Pittsburgh on Friday, presenting his new picture of cosmology. It was my first time seeing a Penrose presentation, and I was delighted to find it filled with the same rich, beautiful diagrams that are in his books. Penrose calls his wild new proposal, “Conformal Cyclic Cosmology.” Here’s the basic idea.

Penrose proposes we construct a sequence of FLRW spacetimes (each one representing a model of cosmology in which the Universe is expanding), scale each one by a conformal factor, and then paste them all together to get a new spacetime. This new “super” spacetime is supposed to represent the Universe, as a sequence of expansion periods that Penrose calls aeons.

Now, in a bit more detail: Each FLRW spacetime is related to an aeon in the super-spacetime by a particular conformal transformation, which preserves causal structure, but which screws up length and time measurements. Under this transformation, both the big-bang and future-infinity become spacelike hypersurfaces, with finite time in between. So, Penrose proposes, the “big-bang” of one aeon can be identified with “future-infinity” in another aeon. This creates a sequence of aeons pasted together, each with the causal structure of an FLRW spacetime. The result is an account of the very large scale structure of spacetime, in terms of a nice general relativistic spacetime (no string theory, quantum gravity, etc.).

Woah. So, why on earth would you you that? Penrose thinks this model accounts for the three biggest problems in cosmology in one shot:

First: Explaining the apparent low-entropy state of the early Universe (Sean Carroll has recently attacked this problem. But the nice thing about Penrose is that he can actually give a precise statement of what it means for the early-Universe to have low entropy: it’s called the Weyl Curvature Hypothesis (wikipedia). This hypothesis is true at the border between aeons in Penrose’s Conformal-Cyclic-Cosmology — indeed, this is apparently required in order to glue the aeons together smoothly. A remaining question, of course, is whether or not this is related in any useful way to the Boltzmann entropy on the scale of every-day objects…

Second: the black-hole information paradox. As I’ve ranted before: black hole evaporation isn’t really a paradox, but rather a case where many physicists are demanding a more “complete” theory. Penrose is not one of them: he thinks information really is lost in a black-hole singularity. The Conformal-Cyclic-Cosmology model fits this view nicely. Very roughly, in order to smoothly glue together the aeons, it turns out that only conformally invariant matter fields can be around at the end of each aeon. So, black holes must disappear; the popping-out of “remnants” of particles when the black hole evaporates is incompatible with Penrose’s model.

Third: the cosmic acceleration problem. This really is a problem. But Penrose says his model might account for it. Apparently, Penrose has calculated that some gravitational radiation will survive at the boundary between aeons in his model. He suggests that this could provide curvature to spacetime even in the absence of matter — which is enough to generate an accelerated expansion.

This really is a wild proposal. But it’s pretty surprising that such a simple model might deal with so many problems at once. Of course, there are not yet any good philosophical reasons to prefer this model over all the other proposals flying around in the zoo that is modern cosmology. However, Penrose did suggest one unique consequence of his cosmology, which is actually testable. Most cosmological models predict a perfect black-body spectrum in the Cosmic Microwave Background; Penrose is predicting a slight deviation.

In Penrose’s Conformal Cycling Cosmology, a gravitational radiation field survives on the spacelike hypersurface representing the “big-bang” of our aeon. Moreover, that field is sensitive to conformal transformations, and gives rise to density fluctuations at the big bang. These fluctuations, according to Penrose, should manifest as ever-so-slight deviations in the CMB spectrum. He has suggested that conformally skewing the CMB might make these deviations more visible. Unfortunately, Penrose hasn’t collected enough data to confirm or disconfirm his hypothesis. But it will be very interesting to see how this turns out!

6 thoughts on “Penrose in Pittsburgh”