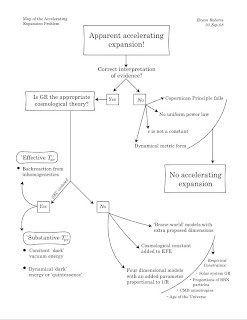 Ten years ago, the physics community came to agree that the expansion of the Universe is experiencing a positive acceleration. The experts still disagree on why. Everything but the kitchen sink has been proposed (I’ve mentioned this twice before), but there is a paucity of experimental evidence to favor one proposal over another.

This situation strikes me as a gold-mine for philosophers physics. In particular, I would hope that we could learn something interesting about what kind of reasoning is allowed in such an empirically starved research program. In particular, what I’d like to know is:

What argumentative moves are licit in response to the cosmic acceleration problem?

As a first step toward figuring this out, I made a map of the most common arguments being made. To see my map, click the image on the left (or download the PDF). This map is inspired by a (much smaller) such diagram given by Sean Carroll (2003). Suggestions are more than welcome!

4 thoughts on “Map of the Cosmic Acceleration Literature”