Introduction. Craig Callender (2001) and Jeremy Butterfield (2004) have recently suggested that the Rotating Disc Argument (RDA) fails in General Relativity. I argue that this conclusion is wrong: two recharged versions of the RDA do work in GR. In this post (Part I), we’ll review the necessary background material (without GR):

In the next post (Part II), I’ll explain the Callender-Butterfield complaint that the RDA fails in General Relativity, and then argue for two modifications of the RDA do work in GR.

1. The Original Rotating Disc Argument (RDA). The RDA is supposed to be a counterexample to one view about what an object’s properties consist in. Fundamental objects can have intrinsic properties (such as the intrinsic angular momentum of an electron), as well as spatial location properties (described however you like). And there is a philosophical view, often called “Humean Supervenience” (HS), which says: those properties are all there are. Every property of every object is made up of fundamental objects (such as electrons), and so the properties of every object are just combinations of the intrinsic properties and spatial locations of its fundamental parts

The putative counterexample to this view: imagine two perfectly homogeneous, continuous discs; one is rotating and the other is not:

The idea is that these discs have different properties, but they they can’t be distinguished by the intrinsic and spatial properties of their parts. Here’s how this is supposed to work.

First, the continuous homogeneity is supposed to guarantee that you can’t pick out the history of any individual point on the disc. So you can’t follow the individual worldlines of the points to tell if they are all vertical (motionless through time), or spinning around like a cork-screw.

Second, you are supposed to ignore every other physical effect that angular momentum incurs on the parts of the disc. Then the claim is: these two cases can’t be distinguished by the spatial locations and intrinsic properties of their parts, and “Humean Supervenience” is defeated.

2. A More Sophisticated Version. As Callender rightly points out: that second step was pretty bogus. Imagine a spinning bucket. What happens to the surface of the water inside? It becomes convex. So the spatial locations of the points on the rotating disc do distinguish it from the static one. Furthermore, phenomena like this always indicate whether or not an object is spinning in the real world. So if you imagine them away, you really don’t have any reason to think the two discs are different.

However, Butterfield suggests a modification of the RDA that avoids this complaint. Instead of a rotating and non-rotating disc, consider these two cases: 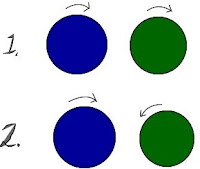 In Case 1, two homogeneous discs rotate clockwise. In case 2, one rotates clockwise and the other counter-clockwise. Butterfield’s more sophisticated RDA says: Cases 1 and 2 can’t be distinguished by the intrinsic properties and spatial locations of the parts of the discs. The Newtonian effects of rotation equally appear on all four discs. But there is clearly a difference between the two cases. So Humean Supervenience is again defeated.

The point of all this has been to get clear on the RDA, not to advocate it. In fact, Butterfield (2004) has given a very original rebuttle of the RDA, by revising the Humean Supervenience claim in a way that allows him to sneak in velocity as an “intrinsic property.” I will not be discussing this idea here. Instead, I’d like to argue against a claim that both Butterfield and Callender take for granted: that the RDA fails in GR.

This argument is to be continued on Wednesday.

3 thoughts on “Rotating Discs in GR: Part I”