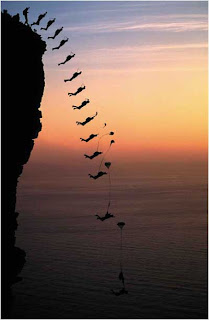 During a visit to Skydive, PA yesterday, I noticed jumpmaster Jim tightening a corset-like weight belt onto his abs. “Jim, your figure looks so refined,” I commented. Jim sneered. “I’ve got to keep up with the big guy,” he said, nodding toward the hulking student he was about to jump with.

True enough. But it sounded funny to me, having just re-read Galileo’s Two New Sciences. Galileo doesn’t fool around: he clearly states that your speed in freefall does not depend on your mass. His student Viviani famously reported that Galileo discovered this by dropping different weights off the Leaning Tower of Pisa, and observing that they hit the ground at the same time.

And yet, skydivers wear weight belts to fall faster. A slight person like Jim, I myself used to wear such a belt, when I was a student learning to fly with much bigger skydivers than myself. And it really helps. The reason is: even though your body mass doesn’t affect your acceleration in a vacuum, it does affect how hard your body pushes against air.

A few seconds after stepping out of a plane, a skydiver’s motion will begin to be slowed by the drag force of air — the same force you feel when pushing your arm through the water of a swimming pool. The weight of the skydiver pushes back against the drag force, until the two forces become equal and a constant (terminal) velocity is reached. The heavier you are, the harder your body pushes back against that drag force — and the faster your terminal velocity will be. In particular:

where K is a constant, m is your mass, and SA is the surface area that is facing the wind. In short: when you skydive, your surface area slows you down, and your mass speeds you up. That’s why small skydivers sometimes wear weights.

Of course, Galileo still had the basic mechanics correct: when air resistance is neglected, mass doesn’t matter. However, it does seem unlikely that he would have put much thought into the effect of mass on terminal velocity. After all, accurate measurements involving freefall were hard enough even at earthly speeds. As I’ve noted before, the difficulty of these experiments gave rise to much confusion about the nature of freefall in the early years of mechanics.

So. Galileo was right, but you may still need weights to keep up with your skydiving partner. 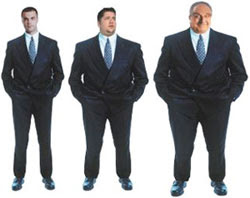 For example, 9% taller (about a head) means 3% faster. For a typical terminal velocity of around 200 feet per second, that means: for similarly proportioned people, a head taller means about 6 feet per second faster.

Are skydivers ever in the kind of environment where these rules don’t hold? Only in the absence of air. This seems to have happened just once, when Joe Kittinger jumped out of a balloon at 100,000 feet during the (1959) Project Excelsior study. That’s well beyond the official edge of the earth’s atmosphere, making it the only skydive from space. I’ll leave you with the video for today. Blue skies — I hope to see you up there!