When I studied history of science, my teachers — especially Ken Manders and Paolo Palmieri — hammered two principles like drill sergeants:

Okay, that seems obvious. We’ve known that since the mid-20th century. Yes, these lessons are easy to under-estimate — until you realize how many historians still haven’t learned them.

Here’s an example. Galileo’s personal notebooks on mechanics have survived the last four centuries. I recently took interest in one famous page among them, in which Galileo did very early work on acceleration in freefall. It’s distinguished title is Folio 152r of Manuscript 72, written sometime between 1604 and 1610. The Max Planck institute has done us the extraordinary service of putting the whole manuscript online.

I first spent a few days assembling my own interpretation of this manuscript page. Then I took a look at how other people interpreted it. Surprisingly, two features of the manuscript that I thought were significant seem to have been completely ignored by scholars. And no wonder — it turns out that the only available English reproductions of the document omit a signficant portion of the diagram. 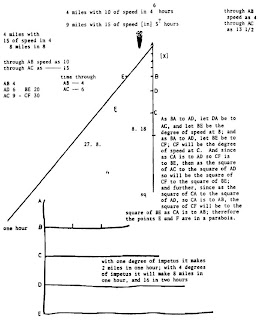 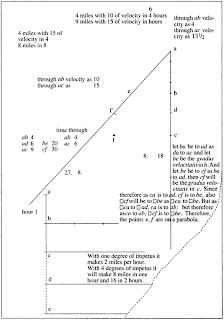 Finally, here’s the original. Can you see what’s missing?

Two important things. First: the little upside-down triangular diagram in the middle. (The circle visible near it is actually printed on the back of the page.) Both triangular diagrams represent distance along the vertical, and velocity along the horizontal. So, if this is small triangle is a scaled-down copy of the larger one, then the scaling rule will actually indicate which rule of freefall Galileo was considering. (It turns out to be the incorrect “double-distance” rule, which says that velocity in freefall is proportional to the square of the distance fallen.)

Second: the languages used. While the top-left, top-middle, and bottom-most paragraphs are all written in Italian, the rest of the text is written in Latin. Galileo wrote comfortably in both, but his train of thought probably only followed one language at time. That suggests a connection between these three paragraphs, which might not have otherwise been apparent, given their physical separation on the page.

So, here’s the way a translation of 152r should look:

Ah, yes. Isn’t that better with the diagram restored? Over a hundred years reading Galileo’s manuscripts, and we’re still learning this lesson!