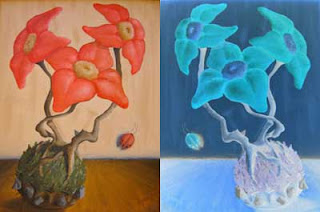 Khriplovich and Lamoreaux (1997, §2) suggest a very interesting argument that CPT provides the correct notion of “complete reversal” in physics.

The background assumption is that “complete reversal” should have effect of reversing the sign of 4-vectors in spacetime. David Malament, for example, has suggested that time reversal in classical electrodynamics should have this effect on timelike vectors. The proposal here is that “complete” motion reversal to have this effect on all vectors (timelike, spacelike, and null).

What about PT? After all, flipping about two axes is equivalent to a rotation. Shouldn’t that be enough to reverse all four vectors? As it turns out, it’s not enough, at least when it comes to 4-current ja. Since both P and T fix charge density and reverse current, we have:

To reverse current, we need an operator C that sends particles to antiparticles, and thus sending ja to -ja. Thus, to get “total” motion reversal in a world with current, we need the CPT operator.

Update: Wolfgang reports news about evidence for CPT-violation in a recent Fermilab experiment.

8 thoughts on “CPT: The ‘Intuitive’ Approach”