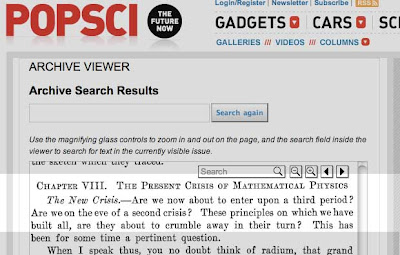 With 20-20 hindsight, we all agree that Einstein’s discoveries of 1905 revolutionized nearly every area of fundamental physics. But what did scientists think at the time? One telling source is Poincaré’s 1907 account of the “new crisis” in physics (available here, on the newly released Popular Science archive). Poincaré identifies five fundamental principles he thought were in danger of being overturned:

What I find striking about this list is Poincaré’s recognition of the deep and difficult consequences of taking classical electrodynamics seriously — and in particular, of retaining the principle of relativity. Of course, only 3 and 4 were actually overturned, and a version of 4 may still be salvageable (by replacing “mass” with “rest mass”). And it’s somewhat surprising that as late as 1907, Poincaré isn’t mentioning Einstein by name.

But then, I suppose it’s never clear what the revolution will bring until well after it’s over.

8 thoughts on “1907 Crisis in Mathematical Physics According to Poincaré”