I was once a teaching assistant for John Earman’s “Introduction to Philosophy of Science” undergraduate course. On the very first day of class, John put this image on the overhead projector: 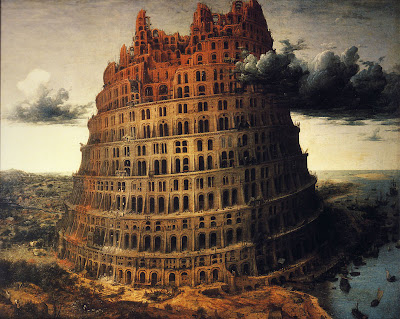 John’s worry was that philosophy of science is becoming so specialized that we can hardly communicate our work to others in the field — let alone to the philosophical community at large. He made a similar remark in his 2002 PSA Presidential Address (PhilSci-Archive). What John didn’t say is what we should do about it. I suppose he didn’t know.

To investigate, I decided to participate in a conference consisting mostly of philosophers in very different fields than my own, at this year’s NCPS meeting in Charlotte. (The conference was wonderful, by the way). I tried my very best to pitch a paper on time reversal to a general audience (Draft PDF). But all things said and done, I don’t think I connected with more than a third of my audience. Discussion with a few people afterward suggested that I was thwarted by the Problem of Babel, after all.

I find it hard to believe that our concerns are that different across analytic philosophy. If so, then why is the Problem of Babel so pervasive? And what should be done to overcome it?

9 thoughts on “Is philosophy fracturing, and what should we do about it?”