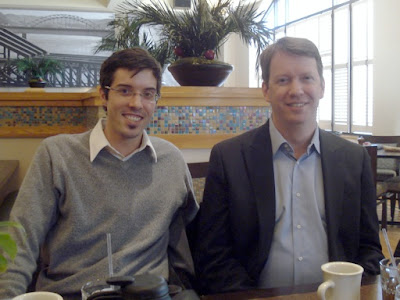 Sean Carroll of Cosmic Variance made his way to Pittsburgh on Friday. Sean and I managed to solve the problems of the Universe over lunch (more or less), before his visit to the Center for Philosophy of Science. We were joined by fellow Pittsburgh philosophers John Earman, Balázs Gyenis, Elay Shech, and Julia Bursten.

After lunch, Sean gave a very interesting lecture on why the early Universe might appear to have begun in a low-entropy state. His idea, stemming from a couple of his recent papers, is that the entropy of the Universe can increase without bound. Once the Universe has reached maximum entropy state (which Sean models as de Sitter spacetime — empty but expanding), there is some quantum mechanism a la Farhi, Guth and Guven (1990) that can pinch off new ‘baby’ Universes, in which entropy can continue increasing. The process is symmetric in time, and can be continued indefinitely. 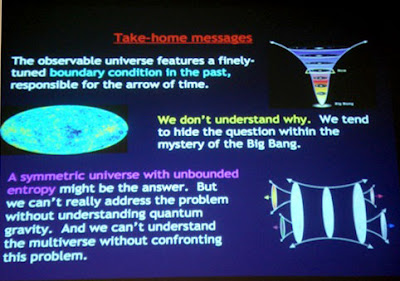 Pittsburgh was the first stop on Sean’s tour for his new book, From Eternity to Here: The Origin of the Universe and Time. The book will be published by Dutton, is written for popular science audiences, is scheduled to be out this Fall (2009).