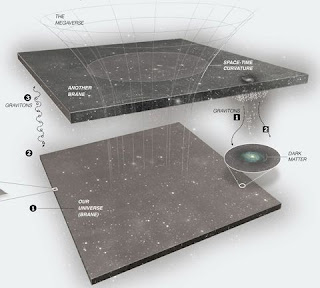 Kentucky, who runs a fantastic blog over at arxivblog.org, has pointed out a new calculation about black hole creation here on earth. The paper (arxiv) suggests that mini-black holes might be created at CERN, and actually be long-lasting, existing for as long as a minute. Kentucky is worried about all of our well-beings.

The press for CERN is of course nice. But as I’ve argued before, there will be no deadly black holes created at CERN.

The theories that predict mini black holes are highly — I repeat, highly — speculative. For example, in the paper Kentucky mentions, the authors adopt a Randall-Sundrum (RS) brane world model. In these theories, gravitational interactions take place in 5-dimensional (4+1) anti de Sitter spacetime, in which there is a 4-dimensional embedded hypersurface (a brane) in which the particle interactions of the Standard Model occur.

In classical general relativity, typical gravitational collapse into a black hole happens for bodies with greater than 3 solar masses of mass-energy. That kind of energy would kind of blow the power-grid here on Earth. However, in the brane world model, the extra spatial dimension for gravity has the effect of vastly reducing the amount of mass-energy in our (4-dimensional brane) world needed to create a black hole — by screwing with that extra dimension, you can still get the necessary curvature conditions. The five-dimensional black hole is then expected to accrete mass until a 4-dimensional black hole is created in our world.

But here’s the real reason why you shouldn’t be worried: The RS brane world theory is still a fairy tale, not a confirmed theory!

There are plenty of competing theories of quantum gravity out there. One of them might even someday be shown to be the correct one, especially once the Large Hadron Collider gets up and running. But for now, there is simply no evidence confirming the possible existence of this 5th spatial dimension. So there is no empirical evidence to support the possibility of black hole creation at CERN.

One thought on “No, there are STILL no deadly mini-black holes!”