Remember that old adage about young scientists? It goes something like this: most scientists do there best work before they’re 25.

I don’t know where this folk truism comes from, but I’ve always wondered if there’s any evidence behind it. Here’s a little evidence that suggests it might be false, and that the “prime age” for discovery in physics might be around 34.

Haphazardly choosing 20 of my favorite great physicists, I charted each one’s date of birth against the date they published a groundbreaking discovery. This indicated how old each physicist was when they made a major breakthrough. Here are the results, organized from youngest to oldest (the physicists inside the dotted lines are the median): 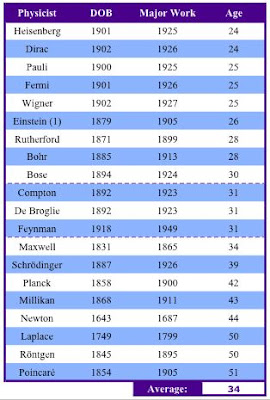 Here are a few interesting features of this chart:

Conclusion: Older scientists do great work too! The folk-truism that youth is the age of discovery is not all that accurate — although it seems approximately true for a generation of quantum theorists.

However, we may still ask: is the age of discovery becoming younger over time? Suppose we restrict our attention to the 19th century and on, and plot the date of birth of each of these physicists against their ages in the year of their major discoveries. Here’s what we get: 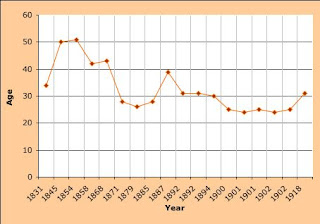 There does seem to be a trend toward younger and younger discoveries (the spike in the middle is Schrodinger). However, it might also be that the youth of the (new) quantum theorists was unnatural, and that if you added in more recent physicists, you would get an upward trend again.

We’ll have to make some less haphazardly assembled charts to find out.