The attention that these two nut-jobs are receiving is a bit discouraging.

Let’s begin with (2), and suppose that you’re not too hardcore about your empiricism. Consider a Schwarzschild blackhole (spherically symmetric and non-rotating, simplified idealization of what is expected at CERN) with mass M. Then dM/dt = -K/M^2, where K is a (very large) constant (See Hobson et al, pp. 277). Let M get very, very small, since we are dealing with particle collisions and not collapsing super-structures. Then dM/dt will become an enormous negative number. In other words, any emergent mini-black-hole will quickly decay into a boring everyday particle. These black holes are harmless and short-lived!

This effect is called Hawking radiation. But should we really believe it will happen? It hasn’t ever been observed. However, the result is far from speculative. It is derived from well-verified results of basic quantum theory and of general relativity. From GR, we need only the causal structure of black holes (which is now well accepted, and if we’re wrong about it, then there are no black holes anyway). And from QT we need little more than quantum fluctuations (consisting of particle/anti-particle pairs), which we have good empirical reason to believe in. So this isn’t one of those weird fringe cases where “quantum theory and gravity don’t mix.” As things currently stand, there are great betting odds in favor of Hawking radiation. 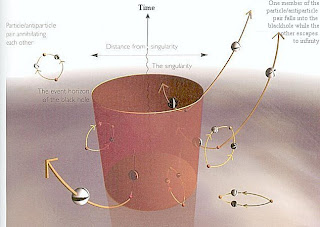 But now let’s suppose that you’re a hardcore empiricist and you still don’t buy it. If that’s the case, then you don’t have to worry about mini-black-holes at CERN in the first place, as there is absolutely no empirical reason to believe they will appear.

Black holes appear when a sufficiently large mass-energy to be crammed into a sufficiently small radius, which in our example is called the Schwarzschild radius (R_s) of that mass. This is not expected to happen at CERN according to any well-confirmed quantum theory, for reasons that have to do with uncertainty, and our consequent inability to squish that much mass-energy into lengths of the order of a very small R_s.

However, some string theorists think that our four dimensions are just one surface of a many-dimensional world that we apparently can’t access. One consequence they derive is a much larger value for R_s for a given mass in these situations (from what I understand, they think it gets stretched out into these extra dimensions). This is the reason people have recently decided to hype up the hope that mini-black-holes might appear at CERN — string theory says there is a larger R_s, so it’s easier to cram sufficient mass into the region. (This idea was sketched in a CERN press release a few years back.) But of course, there is zero empirical evidence for this (and all) string theory. So your empiricist scruples set you free here — mini-black-holes at CERN are little more than a fancy speculation. Maybe there’s monsters in the closet too, but I’m not holding my breath.

2 thoughts on “LHC Black Holes: Why I’m Not Holding My Breath”